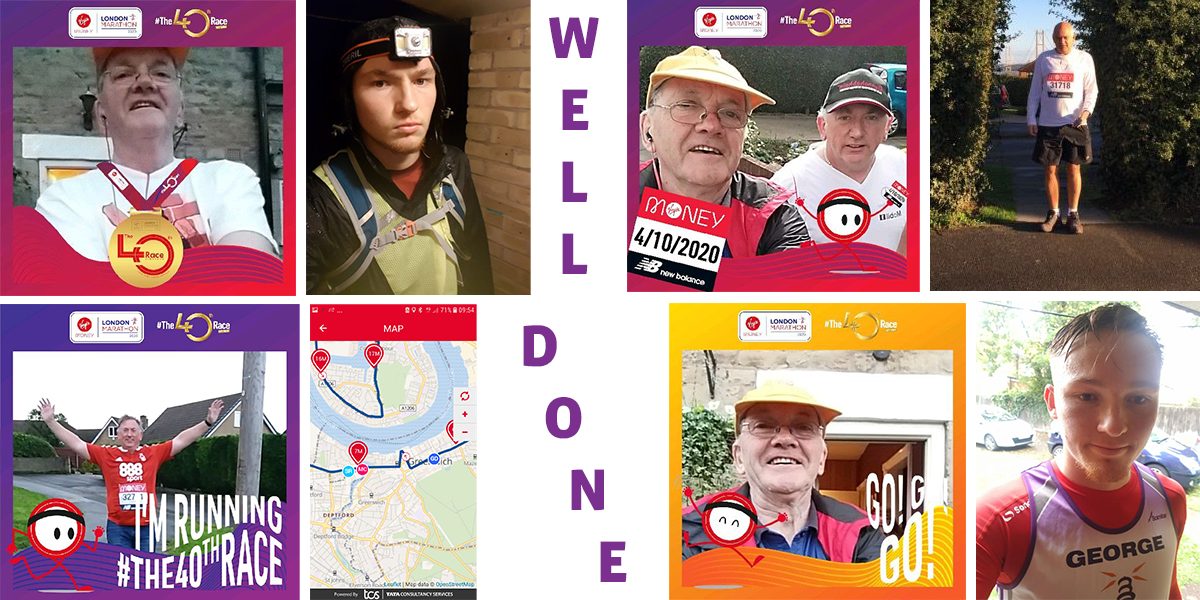 The Marathon was postponed to 4 October 2020 due to Covid 19 restrictions. As October approached it became clear that the Marathon in its normal for could not take place then either. Arrangements were made to stage the physical event for Elite runners only behind ‘closed doors’.

A Virtual Race was organized to replace the General Event, enabling participants to cover 26.2 miles on any route they chose with the distance travelled and time taken converted by an App onto the London Marathon route. Some of our runners elected not to take part in the Virtual Race, preferring to wait until the Event could take place with the total experience and atmosphere of 45,000 runners, hundreds of thousand of spectators and an iconic route through the streets of London.

However, we were able to fill four of our places for the Virtual Event, with the participants being;

Peter Cullen of GKR Scaffolding had hoped to take part but picked up an injury a few weeks before the event and had to withdraw – we hope you’re feeling better Peter.

Rod, Michael and Steve were all fairly late ‘volunteers’ with Michael signing up an hour before entry deadline and only 2 weeks before the event. At that, these three participants recognised that the lack of time to train would limit them to walking the route, not running, something anticipated and encouraged by the organisers. The Event rules were adapted, on the grounds of Safety, to enable participants to complete the 26.2 miles over any period during the 24hrs of 4 October, taking any breaks they wished to.

The App, supported by TCS (TATA Consultancy Services) was really innovative with each runner downloading it onto their smart phone. It then tracked the distance travelled and the time taken for each participant on their chosen route, a Map function on the App converted this distance into a real time position along the Marathon Route.

In addition to the Map Function, the App provided commentary, at every mile marker, from Steve Cram and Paula Radcliffe. They gave a mix of encouragement, description of the location (such as Cutty Sark and Tower Bridge) and advice on running tactics. The App also had a number of Selfie Frames!

All in all it was a day to remember and despite being physically demanding was very much enjoyed by those taking part, in addition, some much needed funds were raised with over £2,500 being raised.