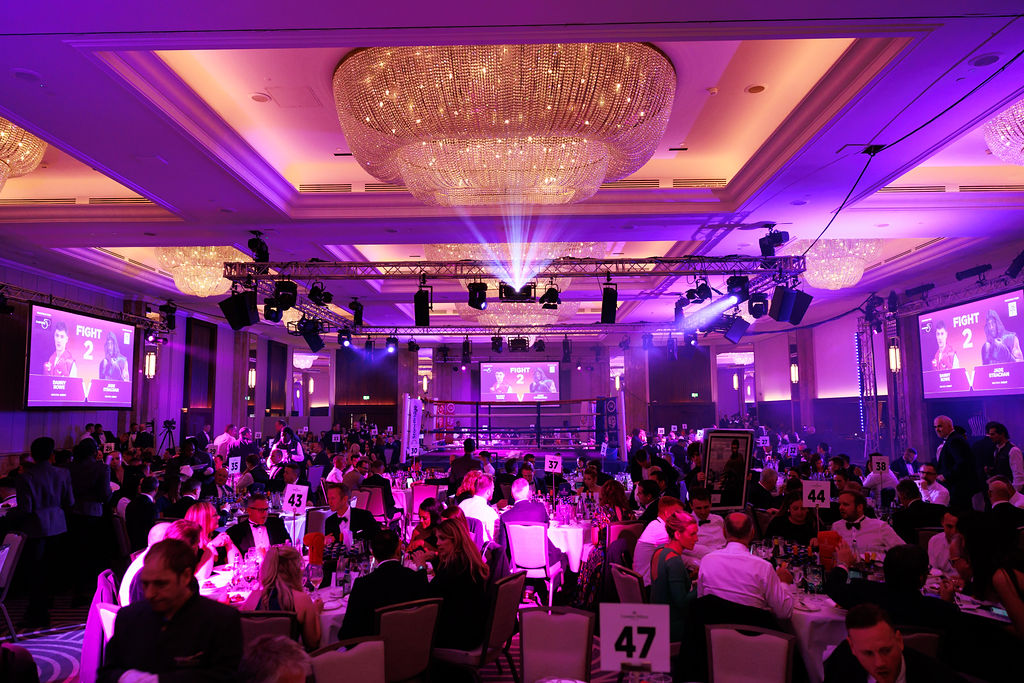 The atmosphere in the room was electric for the much awaited second Construction vs Construction, Lighthouse Club White Collar Boxing Gala at the London Hilton on Park Lane.

550 of the UK and Ireland’s construction industry’s patrons were in attendance, all helping to raise a jaw dropping £326,000 on the night.

Excitement mounted when special guest Frank Bruno took part in a face off with the construction boxers during the drinks reception, sponsored by Glencar

Special guest Frank Bruno, also gave a short interview in the ring, with host Gareth A Davies, about his new book.

The fundraising began with the Coinford sponsored ‘Heads and Tails’ and raffle and guests enjoyed a gourmet three course meal.

A highly entertaining and competitive live auction was conducted by the unique Jonny Gould with auction lots that were very generously donated by JCB, Gallagher Group, Glencar, Kyran Bracken and Saville Row Travel.  There were many generous, big bidders in the room, including regular Lighthouse Club supporters Eddie McGillycuddy (Glencar) and Paul Timlin (Coinford).  10 signed copies of frank Bruno’s new book were also auctioned and raised a whopping £700 each.

Due to last minute injuries from some of the construction boxers, a last minute special bout was suddenly on the bill when pledges of charitable donations led by Powerday’s  Mick Crossan, were made to see boxing legend Steve Collins swapping his celebrity referee’s jersey to pull on the gloves one more time and step into the ring to face Ireland’s rugby International, Sean O’Brien.  There was a great craic in the ring and it wasn’t always boxing in the strictest sense of the word but it was hugely entertaining, especially when the referee  got stuck in the middle at one point!

To finish the night off the two winners of the London Irish sponsored Biggest Punch competition were announced. The competition involved hitting a boxing punch bag as hard as possible and guests had two shots each to prove their prowess. The winners were announced as Karen Greenshields from GAP Group for the ladies, and Niall Hester of Flannery Plant took the men’s prize.

A special pledge in aid of our Boxing HGym partner was led from the ring by special guest George Groves, an alumnus of Dale Youth. Dale Youth, famously, is the boxing club formally housed on the first floor of Grenfell Tower and Lighthouse Club patrons pledged over £8,000 to help send their young boxers to various competitions around the UK and even as far as the Cayman Islands!

Special thanks to our Sponsors

Main Event – Stonebridge A huge thank you goes out to Stonebridge as the event’s main sponsor and for their help getting the event off the ground and putting forward a number of boxers. Thank you to David O’Sullivan and his team.

Heads and tails and raffle sponsored by Coinford