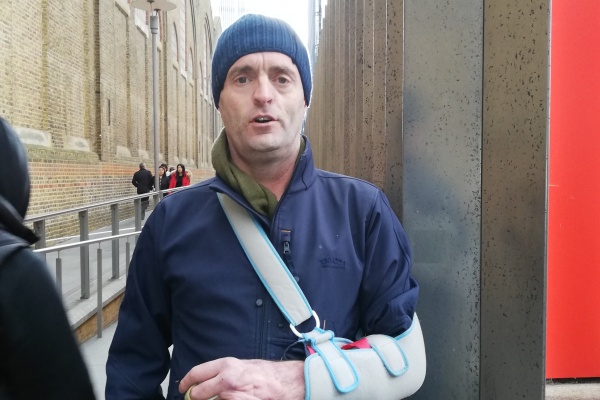 My name is Jason, I’m 44 years of age and I’ve been working in construction for 30 years, I started as a groundworker, pipe layer and concrete finisher and after about eight years in the industry, I took the opportunity to start a trade-in shuttering joinery and steel fixing. My trade has given me the opportunity to work across Europe and in the United States.

On the 6th of October 2018, I was working on a construction site in Scotland pouring concrete on a one-sided wall using peri pans. Some concrete had already been poured but when the next lorry arrived, no instructions were given to the banksman as to how much concrete was going to be poured into the wall. The wall had blown open at the bottom of the shutters and we were working from ladders that were tied to the peri pans. The top of the shutter then blew out and my hand became trapped for about five minutes. It took ten men to free me and I was in the hospital for 12 days.

I broke my wrist and four fingers and had to have one finger amputated following four operations in Scotland and London. I still have specialist physio and pain management treatment twice a week.

I’ve been to hell and back. Following my accident, I split up with my partner and was left homeless. I had to sleep in my car for six weeks and had really had enough of my life and tried to end it all. When I was in the hospital, I was told not to worry about my finances, but no one really helped me at all until I heard about the Lighthouse Construction Industry Charity.

They have helped me so much, it’s unbelievable. They made sure I had somewhere to live and money to buy food. They also helped me access counselling at Chelsea and Westminster Hospital to help me deal with the effects of my accident and without their support, I probably wouldn’t be here to tell this story today.

The road to recovery and how we’ve supported Jason

In February 2019 Jason got in touch after hearing about us from the HSE officer who was investigating his accident.

When Jason contacted the helpline he was in a state of extreme distress and we were concerned for his mental wellbeing.  Jason’s situation was treated as an emergency and within half an hour, our Wellbeing Manager had made contact to discuss what help we could offer.

His most immediate need was to find somewhere to sleep and we found emergency accommodation for one week until he was able to visit his local housing authority and find a more permanent solution. Our local Wellbeing Volunteer also visited Jason whilst he was staying at the B & B to see what else could be offered to improve his situation.

Once Jason was housed, we were then able to help with the purchase of essential items such as a bed and kitchen equipment. We continue to support Jason with a monthly grant and access to support services to aid his emotional recovery. It’s a long road to recovery but Jason is feeling more positive about life.

With your support, we can continue to help more people just like Jason and make a real difference to someone’s life.