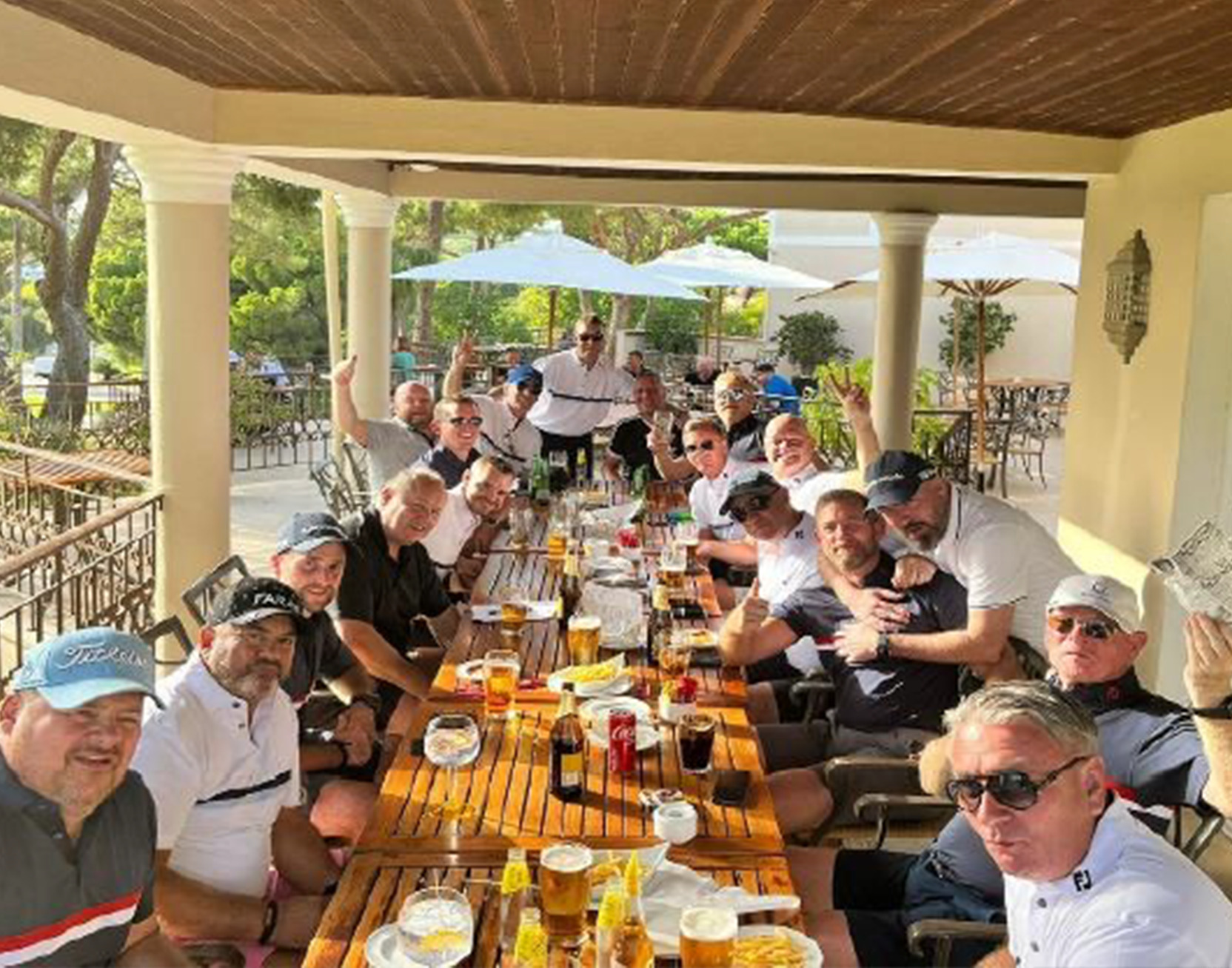 Customer engagement is an essential part of any business, and the construction industry was no different to most others when Covid hit, and these types of activities were put on hold.

At SIG we’re fully committed to putting customers first and so at the first opportunity to put our customers on a plane to Portugal to play golf, we did. Blessed by having some of the finest interior and building contractors in the North West, chaperoned by a few of us here at SIG and Dan from Knauf Drywall alongside industry Legend Huw; responsible for the games and fines system in place.

The reason for the trip apart from getting close to some fantastic customers was to celebrate the fact our two new recruits, legends at least to each other, Matty Boyers and Darren Roberts had served their time and were now let loose in the market, we should at least say sorry in advance.

Some of the athletes we took with us, thanks to PJ and Steve for halving the average age of the group, but doubling up the amount of gin consumed, Pete B for adding the style, and Phil not pictured for signing it all off.

It was because of fine system we were able to raise money for this fantastic charity, one we all unanimously agreed was the right one, and we hope the money serves to help those who really need the support.

So how did someone earn a fine? We were all issued dummies on arrival, and at any point of the day or night if a dummy call was made and you didn’t have your dummy, $5 in the pot. I should mention at this point, being completely rat-arsed and looking after big wedges of cash is no easy task, so our Accountant Ian ‘Arfur Fowler’ Morgan deserves a mention for a superb effort.

Profanities during the game play were not allowed, the fines klaxon was raging at most points of the day, with money going in faster than the rate of inflation in the industry and poor drinking practice was frowned upon also.

It’s good being able to drink, its ok to not be able to drink but the finest display I’ve ever witnessed on a trip like this unfolded, with almost all of us enjoying a few 5 o’clock in the morning finishes backed up by a 10 o’clock rise, a bit of fizz then off to the golf course to drink play more and network laugh at with our customers.

The day on the beach took some beating. For some reason our organiser, who was handpicked to support this trip because of the quality of the audience – Mick had high standards – forgot that we would need buggies. No amount of haranguing the staff on the course was going to change that, so it was left to me to find an alternative. A day at the Purobeach Club it was. The hardcore got there early, the stragglers drifted in, but not sure Daz Friend made it though… the laughs and the fun never stopped unlike Dean who stopped rather abruptly when he plunged face down into the sand at pace after his boardwalk wheelbarrow race, assisted by David – an MD at SIG! – came to a rather erm, undignified end.

We sent Huw to pay the bill, eye watering, but not as bad as him refusing to tip the staff that looked after us all day, surely a fine?

The last night was relatively calm for some, attempts to chat up Jackie Collins failed miserably, a last-minute restaurant detour…wait a minute, who’s organised this…and some more ‘the suns coming up’ finishes to celebrate Steve’s one step away from being a pensioner birthday, meant the trip home the next morning was going to be fun. It’s a good job we had the youngsters Gaz and Alasdair to remind us how east it used to be. Fairy needed that to be honest…

They say a picture paints a thousand words, we’ll leave you with this