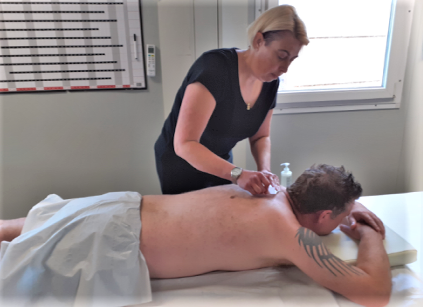 It was definitely a case of no pain, no gain for Balfour Beatty Project Manager, Chris Gill when he elected to have his body waxed to raise money for our charity.

Chris had the brainwave of having his body waxed in four quarters to coincide with the switch on of four new pumps at Islington Power Station.

August 12th was D-Day, or should we say wax day! The plan was to have a quarter of his body waxed each time a pump was switched on and the order was as follows: Pump 1 : Right chest and right back, Pump 2 : Left leg, Pump 3 : Left chest and back, Pump 4 : Right leg

Prior to the event, Chris carried out meticulous checks to make sure everything would run smoothly and the ‘waxathon’ wouldn’t have to be halted due to complications with the pumps, thus preventing him ‘looking like a patchwork quilt for the foreseeable future’.

Having endured considerable pain, and after all four pumps were spinning Chris said,

“Although my first words after the event were “Never again!”, we were all absolutely delighted to have raised so much money for the Lighthouse Club who provide such exceptional support for the construction community”.

Chris and the Balfour Beatty team have collected a hair raising £1165 which will go a long way to helping our construction colleagues in crisis. If you’d like to add to his total you can donate here.  https://www.justgiving.com/fundraising/islingtonwaxathon

Thanks Chris, we hope the soreness has eased off!